Kuta Sunset Bali has long been known as a paradise to travellers. Our first sighting of this Indonesian Island from the air is a breathtaking vista of the royal blue sea rolling towards golden sand lined with coconut palms, and a lot of hotels in Bali have windows facing these beautiful views. But all this will have to wait... After landing in the coastal town of Denpasar, my husband Rick and I immediately travel into the interior's dense jungle and to Sayan's Four Seasons Resort, which by the way is where Julia Roberts puttered about, when not in the nearby town of Ubud sitting in the magical presence of medicine man Ketut Liyer during the filming of "Eat, Pray, Love". In our visits to Ubud, we uncannily find the spirituality of the gentle Balinese people rising like an aura from the public temples and small shrines to be almost tangible. Ninety-five per cent of the population adheres to Balinese Hinduism, honouring the same gods as India's Hindus; though locals are quick to point out they have one supreme god - Sanghyang Widi. More prominent in the everyday life of the Balinese is the continual presence of ancestral spirits and a myriad of powerful Balinese gods, arising from a strong animistic belief of good spirits living in high places, and demons under the sea, while humans try to balance these forces in the middle world with daily offerings. We watch worshippers placing baskets of flowers, rice and sweets on temple and shrine altars for benevolent spirits, and walk-in hop-scotch fashion to avoid stepping on baskets placed along sidewalks for evil entities. Bustling markets dot the route to the Sacred Monkey Forest Sanctuary. Outside the entrance, ladies sell bananas to feed the monkeys. I purchase a half-dozen while noting signs recommend tossing, instead of holding bananas while feeding, and further advise a parking attendant be on hand. Suddenly, a large broad-shouldered male monkey flies out of nowhere aimed at my bananas; my flash reaction is to toss the whole bunch. He scoops them up and runs to a nearby ledge to devour them, while Rick expounds, "Why'd you do that?" Banana-less we start through the sizable park of ancient temples amid thick foliage. The Balinese Macaques (also called long-tailed Macaques) are at all sorts of monkey-business - eating bananas at the hands of less edgy visitors, munching on chunks of coconut supplied by park staff, swinging from trees, sitting nonchalantly with legs splayed, tending to rascally youngsters. Stone steps descend to the Bathing Temple. We become drenched in the sauna-like cocoon of towering trees that let in only squints of sunlight. Stone monkeys dating back to when the temple was built in the mid-14th century appear as Chia Pets, with woolly coats of moss and lichen. We move along to the main temple standing like a massive sentinel with statues of gods and spiritual beings. From the Sanctuary dirt paths take us to artisan villages, each with its speciality of hand-made crafts - one for wood carving, another for paintings and beadwork. Other villages produce stone carvings, batik cloth, and jewellery. 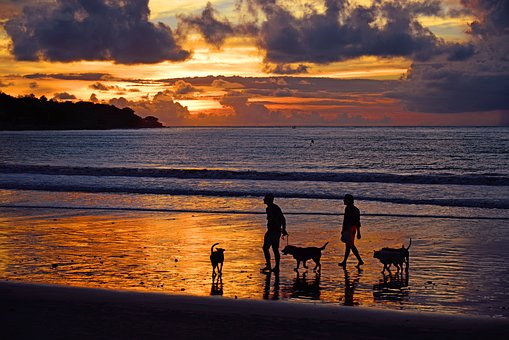